American Psycho and Requiem for a Dream are two pieces of cinematic history that would not have had nearly the impact if it weren’t for the soul stopping performance of an actor named Jared Leto. Born in 1971, this actor has made his mark on the movie-going public (and women’s hearts everywhere) not only by being an extremely talented actor, but also by being heart-breakingly handsome.

Recently, he’s featured in ads for Hugo Boss’ new men’s fragrance, Hugo Red, which made its debut during Berlin Fashion Week. The ad’s tagline is, “Red means go,” and the ad, with Leto clad in a meticulously tailored suit has set hearts aflutter everywhere.

This remarkably versatile actor was named to Reelz.com’s “Top 10 Most Impressive Body Transformations” for his role as the infamous Mark David Chapman in the 2007 movie Chapter 27 about the murder of John Lennon. For the role, Leto added 60 pounds to his frame, making himself almost unrecognizable.

Leto’s band, 30 Seconds to Mars (which is also the title of their first album release), has provided the soundtrack to  many young people’s lives, and almost every adult knows him from the show My So Called Life, which is what shot this star to his fame (but not quite to Mars). Whether you love him for his television roles, or for his brief appearance in David Finch’s Fight Club, you love his intense good looks and his sense of style.

Perhaps the most versatile accessory in any celebrity’s style closet is sunglasses, and many non-celebrities swear by the style-conferring power of a great pair (or two) of shades. They’re the perfect accessory, whether you’re male or female. If you want to get philosophical, you can say that sunglasses are contradictory, worn to keep one’s eyes (or the window to the soul) covered, and yet also worn in order to draw attention to oneself. Well, one of the the most popular brands of sunglasses in hisotry, Ray Ban, seem to have a permanent place in Jared Leto’s wardrobe, and they look amazing. Have a look: 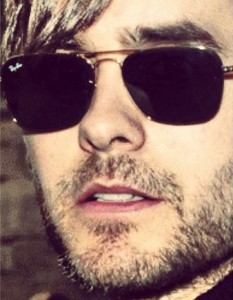 How is it possible to make Jared Leto even better looking? With a pair of Ray Ban Caravan shades, of course (image napszemuveg.blog.hu)

Jared Leto looks amazing rugged and handsome in these Ray Ban Caravans. The thin wire frame in gold complements the dark square lenses perfectly, creating a look that’s at once masculine, rugged, and stylish. And on Leto’s squared face with a strong jawline they look even better. Many people might not expect that this handsome hipster was from the Bayou, but Leto’s choice of these timeless, classic, down-to-earth sunglasses wouldn’t be out of place anywhere, not even his birthplace of Bossier City, Louisiana.

The great thing about Ray Bans is that they look terrific on everyone, and they provide unsurpassed protection against UV rays. Pilots and sailors have sworn by them for decades, and anyone even remotely into fashion knows that they have a permanent place in the unspoken accessory “hall of fame.” If you’re a man in the market for a great pair of shades that will always be in style, it would be hard to make a better choice than the classic Ray Ban Caravan.

Ray Ban Caravans: the shades for the man who wants to look effortlessly great in any situation. 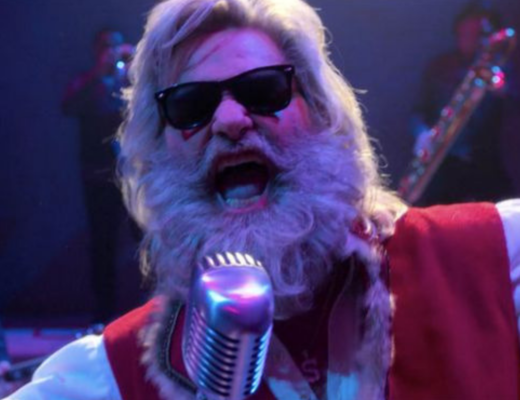 What Sunglasses Does Kurt Russell Wear in the Netflix Movie Christmas Chronicles?